Franchise Woman of the Year
Past Winners Liz Nable discovered her passion for entrepreneurship, business and fitness completely by accident when she first experienced the barre workout while living in New York City. Up until this point, she had been pursuing her prior dream of investigative journalism and was traveling around the world working in news.

When she arrived back in Sydney, she moved on from her journalism career and became Australia's first Xtend Barre franchisee, opening her studio in Mosman.  Fast forward seven years, and she is now the proud owner and operator of three additional studios, all found on Sydney's Northern Beaches. Kate joined ANZ Mobile Lending as the General Manager in 2016. In her role, Kate is responsible for leading the Mobile Lending franchise to increase business performance and continue to evolve the franchise model.

Prior to this role, Kate progressed through the ranks of McDonalds to Senior Management with responsibilities including executing on business strategy, franchising operations and business development.

Kate holds a Post Graduate Certificate in Management Enterprise (University of Newcastle), an MBA (Charles Sturt University) and she will be receiving her CFE accreditation at this year's conference on stage with all the other CFE graduates

Aside from work, Kate has three beautiful children and is a Central Coast Mariner's fan. Sandy Carrington is the Managing Director of FAD Cheer and Dance (FAD). FAD is a franchised Dance and Cheerleading studio. FAD currently has a membership of 5000 students across 50 locations in 2 States/Territories. Sandy is also an advisory board member for the Griffith University Asia Pacific Centre for Franchising Excellence and holds a Graduate Certificate in Franchising.

Sandy has the unique perspective of being both Franchisee and Franchisor taking on the role of Managing Director in 2008. Other relevant business experience includes Corporate and Government senior finance and management roles. 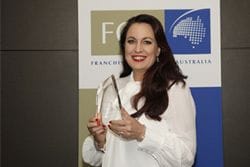 Natalie started her career in the Franchise sector at almost 15 years old; now some 3 decades later she's still passionate about franchising and paving the way for other women in this sector.

Natalie spent the first 10 years of her career in Operational Training roles with multi-unit operations including Collins Foods, Power House Hotels and the Billabong Group. She has since trained thousands of people, leading, mentoring and inspiring along the way.

Natalie is currently the Head of Corporate Brand Support for Foodco, working alongside her husband John. The two have twin 4 year old boys. After the birth of Marlies' first son, who suffered from severe reflux caused by a dairy intolerance, Marlies discovered it was the same intolerance that caused her digestive problems. Adopting the Paleo lifestyle not only resolved this, but fuelled her endless passion for sharing the lifestyle.

Formerly a lawyer, Marlies decided to pursue her dreams and left her career, risking everything to open Paleo Café. With an explosive response, Marlies quickly established the business as a franchise.

Today, Marlies plays a large role in the strategic direction of the brand and has big dreams of showing people there are alternative ways to live. With more than 20 years experience in growing and building successful franchises, Sharon helps business owners through challenges, growth and expansion strategies in her role at Sharon Jurd Events.

She delivers seminars and business mentoring in an impressive and informative format to show attendees a proven formula to be successful in their business ventures.

Sharon can hold both one-on-one seminars and larger forum events and can also help people set their businesses up to franchise. Debb Meyer has a colourful and accomplished career. Having held senior leadership roles with McDonald's, Foodco and Krispy Kreme, to an Associate with the Franchise Relationships Institute, where she gained a reputation for straight shooting and a true commitment to her clients' success, to now; leading a global brand, Narellan Pools with her husband Chris.

Debb is a sharp business woman, engaging speaker, exceptional facilitator, writer and passionate advocate for women in leadership, but most importantly; a wife to Chris and mother to Xavier and Eliza.

After the devastating death of her son Xavier, Debb became a voice for thousands of woman who suffer the loss of a child. She is proof a devastating loss in life can be the fuel to truly live life with passion, conviction and happiness. 
Carolyn speaks at business women's groups, franchise groups and business conventions about her journey and the challenges and benefits of multi-unit franchising.  Outside of work Carolyn enjoys spending time with her family, running and gym.  Her three young daughters ensure she is never bored.

After more than 15 years in the banking sector, in 2005 Belinda Sugars started her own business by becoming a Mortgage Choice franchisee.

What began as a home-based venture with 150 clients has grown in just six years to a thriving  business servicing almost 2,500 clients.

Winner of the Mortgage Choice State Rookie Award in 2006, Belinda has gone on to win the State Mortgage Choice  Business Excellence Award a massive three times and has been featured as a mortgage expert in 'All About the Money', a published finance guide by Julianne Dowling.

Sara Pantaleo, CEO of La Porchetta restaurants took out the VIC/TAS Franchise Woman of the Year Award in August 2010, as well as the National Award at a Gala Presentation dinner at the Marriot Resort and Spa in October 2010.

La Porchetta restaurants is one of the largest Australian-owned franchised restaurant group in the Asia Pacific region with over 80 businesses in the group. Joining the system in 1996 to drive brand growth and renew the corporate direction, Sara quickly ascended to National Manager in 1998 and then, in 2002, was appointed as CEO. Sara drove growth from 12 franchisees to 80 and oversaw the systems expansion into New Zealand and Indonesia.

The last 12 months for Sara have been as challenging as they come, with the sudden passing of her brother and founder of La Porchetta, Rocky Pantaleo. Sara's ability to manage the situation, both from a media, business and personal level - and to keep the business focused and on track - reinforced her already strong contributions to the system and the franchise sector this year.